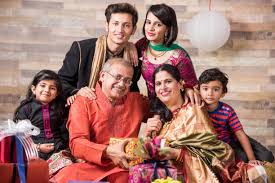 Indian society is collectivistic and promotes social cohesion and interdependence. The traditional Indian joint family, which follows the same principles of collectivism, has proved
itself to be an excellent resource for the care of the mentally ill. However, the society is changing with one of the most significant alterations being the disintegration of the
joint family and the rise of nuclear and extended family system. Although even in today's changed scenario, the family forms a resource for mental health that the country cannot
neglect, yet utilization of family in management of mental disorders is minimal. Family focused psychotherapeutic interventions might be the right tool for greater involvement of
families in management of their mentally ill and it may pave the path for a deeper community focused treatment in mental disorders. This paper elaborates the features of Indian family
systems in the light of the Asian collectivistic culture that are pertinent in psychotherapy. Authors evaluate the scope and effectiveness of family focused psychotherapy for mental
disorders in India, and debate the issues and concerns faced in the practice of family therapy in India.

The term family is derived from the Latin word ‘familia’ denoting a household establishment and refers to a “group of individuals living together during important phases of their
lifetime and bound to each other by biological and/or social and psychological relationship”.[1] The group also includes persons engaged in an ongoing socially sanctioned apparently
sexual relationship, sufficiently precise and enduring to provide for the procreation and upbringing of children.[1] Unlike the western society, which puts impetus on “individualism”,
the Indian society is “collectivistic” in that it promotes interdependence and co-operation, with the family forming the focal point of this social structure. The Indian and Asian
families are therefore, far more involved in caring of its members, and also suffer greater illness burden than their western counterparts. Indian families are more intimate with the
patient, and are capable of taking greater therapeutic participation than in the west.

In a situation where the mental health resource is a scarcity, families form a valuable support system, which could be helpful in management of various stressful situations. Yet, the
resource is not adequately and appropriately utilized. Clinicians in India and the sub-continent do routinely take time to educate family members of a patient about the illness and the
importance of medication, but apart from this information exchange, the utilization of family in treatment is minimal. Structured family oriented psychotherapy is not practiced in India
at most places in India, except a few centers in South India. Research publications on family therapy from India are also few. Thereare some evidence from published “family intervention
studies”, but whether all non-pharmacological interventions with family members can be considered as “family therapy” is a matter of theoretical debate.

Sholevardefines family therapy as any use of a family-focused intervention to bring out behavioral and/or attitudinal changes in one or more family members” Although the “family”
may be involved in many schools of psychotherapy, “family therapy” represents the most direct branch of psychotherapy that deals with the family system as a whole.

Families are changing all over the world. What we see as a family some years back is different. There has been a lot of transition from traditional towards modern families. It is
sometimes because of technology but most importantly it evolves around the culture and how different people have adapted to different cultures. (The Future of Families to 2030)

Families; now and then:

A few years back, concept of a family was different. In different cultures family was considered parents raising their children and all of them living together raising children and
grandchildren together. The aunts and uncles were part of families and were significant other. Three generations were considered to be a single family who are living together; but
now the concepts of families have totally changed. Your significant others now days are only the parents or your siblings. At a time one or two generations make a family. This change
does not vary on a cultural basis but it is seen to be adapted universally. (The Future of Families to 2030)

The book marks different examples and compares both stereotypes of families. The traditional families vary from modern families in a lot of ways. Example of primitive Chinese’s societies
is given where is mentioned how the family works on the farm together play their role and act as one unit. Each of the family members has separate shares of land and they get divided
when children grow up. To avoid this, primitive families gave the land to the eldest son. Further, traditional families have an advantage that the families stay close together with a
strong bond.