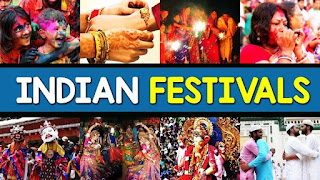 From the start of the year to almost every month, there is one festival or another. Diverse like its landscape, festivals of India are varied. Lohri, Bihu, Pongal, Makar Sankranti,
the magnificent parade on Indian Republic day and Jaipur Literature Festival is held in January. Goa Carnival, Jaisalmer Desert Festival, Dance Festivals in Khajuraho & Konark,
Crafts Mela, and Flower Festivals are held in February. March is made special with the colorful Holi, one of the most popular festivals in India, Elephant Festival,
Marwar Festival and more. April too comes with many festivals, like Baisakhi, Bihu, and Tribal festivals, etc. May has festivals held in monasteries in Sikkim and Ladakh. The months
of June and July have festivities of Urs Fair, Rath Yatra, Teej, etc.Independence Day, Eid Ul Fitr, Janmashtami, Raksha Bandhan, etc. are festivities of August. From October,
the festivals are back with Durga Puja, Dussehra, Diwali, and other. November and December have festivals, like Pushkar Camel Fair, music festivals, and
celebrations of Christmas and New Year.

Attending the fairs and festivals of India can be real fun as these are not only celebrated in a rollicking way but also allow you to peek into the customs and traditions of the country.

Islam in India is the second largest religion with over 172 million Muslims, according to India's 2011 census.The Islamic festivals which are observed and are declared public holiday
in India are; Eid-ul-Fitr, Eid-ul-Adha (Bakri Eid), Milad-un-Nabi, Muharram and Shab-e-Barat. Some of the Indian states have declared regional holidays for the particular regional
popular festivals; such as Arba'een, Jumu'ah-tul-Wida and Shab-e-Qadar.
Christianity is India's third-largest religion. With over 23 million Christians, of which 17 million are Roman Catholics,India is home to many Christian festivals. The country celebrates Christmas and Good Friday as public holidays.