Clothing in India changes depending on the different ethnicity, geography, climate, and cultural traditions of the people of each region of India. Historically, male and female
clothing has evolved from simple garments like kaupina, langota, dhoti, lungi, sari, gamcha,and loincloths to cover the body into elaborate costumes not only used in daily wear, but also
on festive occasions, as well as rituals and dance performances
The clothing in India also encompasses the wide variety of Indian embroidery, prints, handwork, embellishment, styles of wearing cloths.A wide mix of Indian traditional clothing
and western styles can be seen in India.

The traditional Salwar-Kurta or the Salwar-Kameez was the result of the practice followed by Muslim women to wear divided garments during the Mughal period. This dress has survived to
this day and has a variant called ˜Chooridar" in which the salwar is replaced by the "Chooridar" a tapering pant with folds at the bottom.The "Lehenga"is another dress that had its
origins during Mughal times. It was believed to be a dress that defined Indian values completely, which is probably why it has survived to this day. Even now, it makes use of Mughal
era patterns and designs though it has been given many contemporary designs as well. In Gujarat and Rajasthan the variant of the Lehenga- the "Ghagra Choli" with an "Odhni" or dupatta
still preserves its ethnicity with mirror work and embroidery. Some Rajasthani women wear black "Ghagra Cholis" with Cowrie shells and mirror work too. During the reign of the Nawabs in
Lucknow the "Sharara" or "Gharara" was born which was influenced by the "Ghagra Choli"
During the British rule, women in West Bengal did not wear blouses and covered the upper part of their body with the end of their saree. The British populace did not find it
appropriate and that is how blouses and petticoats came into existence.
The Saree is one Indian dress that enjoys worldwide popularity. The UNESCO praises it as valuable Indian contribution to the world cultural heritage and diversityâ€. Artisans
across the country make use of locally available resources to produce sarees, which are a masterpiece in their own self. The beautiful weaves and designs on sarees makes one wonder
about the creativity of these weavers. Different regions of India have different specialty and variety of sarees.
Maharashtra has kept alive the 2000-year old traditional method of weaving Paithani sarees using pure gold threads and yarns of silk. The other types of sarees are Andhra
Pradesh.Pochampally saree or PochampalliIkat, in which skillful weavers create geometric patterns in silk, Assam is home to rich golden colored Muga silk, the finest of India
wild silk sarees. Kanjivaram and Patola are also the finest silk sarees in India.
Talking of Kashmiri dresses, the "Pheran' is what comes to mind instantly. It is a loose woolen gown which is worn by both men and women to beat the freezing temperatures of the
region. It has minute embroidery around the neck and the edges.Motif-rich "Mekhela Chador" the traditional dress worn in the state of Assam. This dress is made from Muga silk and
consists of a skirt-like lower part. The "Riha" and "Chador' is worn on the upper part of the body.North-eastern dress is the "Puanchei"of Mizoram, which is cherished by every Mizo woman.
Coming to men’s clothing, we find that the unstructured ‘Angrakha’, It is also a favourite with politicians and the royals. Another dress that is considered perfect for weddings is
the Sherwani. During weddings men can be seen donning a Dhoti or a Pyjama with a Sherwani. Sherwani is also worn on other special occasions like festivals and other celebrations.
A kurta is also worn with pyjamas in North India. In fact, the Pathani suit is a popular regular wear in Patiala and the richer version is also worn during weddings. In Srinagar it is
also known as ‘Khan’ dress.
The Dhoti-Kurta is the traditional wear of men in villages mostly in south Indian cities. It is known by different names in different parts of India like ‘Mundu’ in Malayalam, ‘Dhotar’
in Marathi, ‘Panche’ in Kannada and many other names. The Dhoti is worn almost all over India but the form may differ.

When we look back at Bollywood inspired Indian fashion trends from the 60s to 90s, some of them make us cringe.

Loud Colour Palette - Govinda is the icon of the loud colour palette and he made multiple hues his signature style during his reigning years. While he became the fashion inspiration for
the masses, no one could be spared from the web of colours of the 80s and early 90s. Almost every actress and actor sported the clown look in the movies during the decade. We have
witnessed the gaudy Indian fashion trends on Madhuri Dixit, Sri Devi, Juhi Chawla and Karisma Kapoor. Even Aamir Khan and Shah Rukh Khan have displayed a little too much colour from
time to time.

Tapered Jeans-The high waisted pants didn't enhance the waist or the legs, which meant that the 90’s tapered jeans, had a very unflattering silhouette. Even those with envious figures
looked shapeless in this ugly piece of attire. During those days the ugly pair of jeans was a common sighting and was sometimes paired with uglier tropical tops.

Bell Bottom Trousers - While flared trousers like boot cuts look smart and enhance ones legs, the more-than-needed flare of the bell bottom trousers are no longer covetable. They make you
look absurd with bell like structures ending the outfit. While flares have come back into fashion, we are pleased that the same cannot be said for bell bottomed trousers which are better
off as mere memories of the hippie Indian fashion followers of the 70s.

Dungarees - Among the Indian fashion trends, this is weird attire especially for the men and the 90s saw stars like, Shahrukh Khan and Salman Khan, display the overalls look. The female
actresses have managed to carry the dungarees look in a trendy way. However we hope that the male actors refrain from wearing this outfit especially the colourful ones to avoid looking
like four year old boys.

Puffy Sleeves - Fashion in the 70s and 80s was mostly emulated from the West, and it was incorporated into Indian ethnic wear as well. Indian fashion trends of these bygone days had
another eyesore in the form of puffy sleeved kurtas and blouses. We're sure we're not the only ones that hopes that the pirate-like puffs remains at bay for years to come.
Many of us must have become a part of these undesirable Indian fashion trends. Sometimes we would have innocently sported the shocking looks to be on trend and because we probably liked
them at the time and sometimes the crazy looks may have been imposed on us by our loving moms. Irrespective of the reasons behind jumping on the band wagon of these Indian fashion trends,
if you have any funny or embarrassing memories of weird outfits.
Generally, many fashion trends from 1995 onwards continued to be worn in the early years of the decade. Newer fashion trends in the early 2000s included wearing sportswear and
military wear as everyday clothes. This included tracksuits,light-colored polo shirts (sometimes striped and with collars popped), cargo pants (even ones
made out of linen during warmer months), khaki chinos, bootcut jeans, corduroy pants, and rugby shirts. Practical hiking jackets (of the type made by Berghaus), fleeces,
puffer jackets, and padded tartan lumberjack-type shirts were worn as winter outerwear along with brown, grey, burgundy, rust, maroon, or forest green turtleneck sweaters,and
odd navy blue, stone grey, beige, or natural linen sportcoats that fastened with three buttons. These fashions continued into the mid and late 2000s.
The 21st Century: The beginning of the 21st century brought about a stable and clear picture of the Indian Fashion Industry. As women became independent, pants, short skirts, and
bold costumes and fashion became more cosmopolitan than region specific. This transformation is majorly seen in the style of wearing blouses and sarees these days. Halter-neck,
back-button blouses, high-neck blouses, Katori style and puffed sleeve blouses have become the first preference of women rather than the traditional style of blouses. Sarees are draped
mostly in Gujarati style and it would be right to say that Indian fashion scene is greatly influenced by its film industry time and again. Many global brands entered the denim business
in India as Levi Lee, Seven Jeans, Pepe Jeans, and so forth. Branded attires mark a significant contribution to the evolution of Indian. 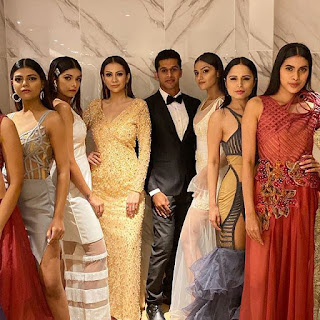 The fusion wear is gaining enormous popularity with the introduction of the long maxi with collars, hanky hems, cold shoulder maxi, crop-tops, heavy duty capes, and tunics. While, kurtas,
lehengas, indo-western tops and spaghetti kurtas are turning lots of head. The fashion trend in India has been influenced by the foreign designers and brands who also introduced the
concept of corporate dressing. The corporate style survives to date with an added element of modernity ensuing the fusion wear.
According to a report by Economic Times, the Indian Fashion Industry marks a growth of USD 100 billion and at a CAGR of 8-10 percent offline, the online fashion segment is expected
to grow by 15-20 percent over the next five years. The market for the fashion industry in India, especially for women, is quite lucrative in terms of scope and variety. Today, while the
rapid growth of information technology popularised the corporate look, the revival of the ethnocultural look has become quite dominant leading to the popularisation of the traditional
forms of art and crafts. Of late, the International fashion brands have begun to focus on the immense potential of this sector offering heaps of opportunities to the in-house fashion
designers. Indian fashion industry has expanded to such an extent over time that it has now come at par with the international fashion industry and has become one of the most popular
revenues generating industries of India.