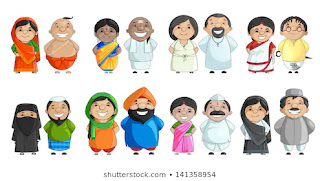 Holi is a major Indian festival celebrated every spring.
India is the birthplace of Hinduism, Buddhism, Jainism and Sikhism, collectively known as Indian religions.Indian religions also known as Dharmic religions are a major form of
world religions along with Abrahamic ones. Today, Hinduism and Buddhism are the world's third- and fourth-largest religions respectively, with over 1 billion followers altogether,
and possibly as many as 1.5 or 1.6 billion followers. Throughout India's history, religion has been an important part of the country's culture.
Religious diversity and religious tolerance are both established in the country by the law and by custom; the Constitution of India has declared the right to freedom of religion to
be a fundamental right.

Atheism and agnosticism have a long history in India and flourished within Śramaṇa movement. The Cārvāka school originated in India around the 6th century BCE and is one of the
earliest form of materialistic and atheistic movement in ancient India. Sramana, Buddhism, Jainism, Ājīvika and some schools of Hinduism like Samkhya consider atheism to
be valid and reject the concept of creator deity, ritualism and super naturalism. India has produced some notable atheist politicians and social reformers.

According to the 2011 census, 79.8% of the population of India practices Hinduism and 14.2% adheres to Islam, while the remaining 7.37% adheres to other religions, mostly Jainism,
Buddhism, Sikhism and Christianity. Zoroastrianism and Judaism each has several thousands of Indian adherents, and also have an ancient history in India. India has the largest
population of people adhering to Zoroastrianism and Bahá'í Faith in the world, even though these two religions are not native to India. Many other world religions also have a
relationship with Indian spirituality, such as the Bahá'í Faith which recognises Buddha and Krishna as manifestations of the God Almighty. Despite the strong role of religion in
Indian life, atheism and agnostics also have visible influence along with a self-ascribed tolerance to other people. According to the 2012 WIN-Gallup Global Index of Religion and
Atheism report, 81% of Indians were religious, 13% were not religious, 3% were convinced atheists, and 3% were unsure or did not respond.

Traditionally, Indian society is grouped according to their caste. It is a system in which social stratification within various social sections defined by thousands of endogamous
hereditary groups are often termed jāti or castes. Within a jāti, there exists exogamous groups known as gotras, the lineage or clan of an individuals. Caste barriers have
mostly broken down in cities but still exists in some form in rural areas.

Hinduism is the majority in most states; Kashmir and Lakshadweep are Muslim majority; Nagaland, Mizoram and Meghalaya are Christian majority; Punjab is a Sikh majority with Hindus 37%. Although participants in the Indian census may choose to not declare their religion, there is no mechanism for a person to indicate that he/she does not adhere to any religion.
Due to this limitation in the Indian census process, the data for persons not affiliated with any religion may not be accurate. India contains the majority of the world's Hindus,
Jains, Sikhs, Zoroastrians and Bahá'í. Christianity is widespread in the Northeast India, parts of southern India, particularly in Kerala and among various populations of Central India.
Muslims are the largest religious minority. India is also home to the third-largest Muslim population in the world after Indonesia and Pakistan.